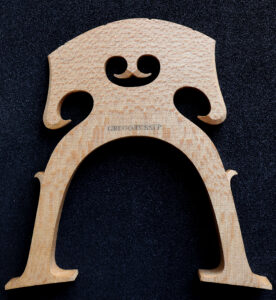 Gregory (Greg) Sapp provides high level restoration and repair services to musicians and shops all around the United States out of his shops in Illinois. Greg attended the Kenneth Warren & Son School of Violin Making (now the Chicago School of Violin Making), working under the guidance of Master Tscho Ho Lee. While in school, Mr. Lee commissioned two violas and a cello from Greg. Mr. Lee also had Greg heavily engaged in doing repair work as well. Greg graduated Violin Making School in December of 1981 achieving an “Excellence in Craftsmanship” grade. After graduating from Violin Making School, Greg worked at Kenneth Warren & Son in Chicago, a premier shop in the Midwest, where he worked directly with Mr. Zenon Petesh, This opportunity brought many challenging projects and provided many fine instruments of historical importance for him to work on. In 1986, Greg became Head Repairman and continued in that capacity through April of 1994. In 1994, Greg opened a repair studio out of his home, providing repair and restoration services. While his main focus was restoration and repair, he also made a number of instruments in those years.
Early in 2003, Greg opened a part-time repair studio in downtown Chicago, where today he continues to perform the majority of repairs for Kenneth Warren and Son, as well as attending to walk-in customers by appointment. In 2006, with the help of his wife, Mary Ellen (Mel), he opened a full-service retail store in Batavia, IL. Greg has been a regular contributor to the Oberlin Restoration Workshops. In addition to being an instructor in 2016, he has been providing master classes and presentations on advanced restoration techniques for many years. He has dedicated much time and thought to creating devices to assist him with challenging restoration projects and enjoys sharing these items and concepts with his colleagues and the attendees at the Workshops.