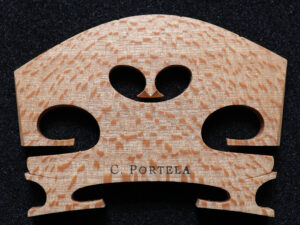 Carlos Portela was born in 1984 in Viana do Castelo, Portugal.

Passionate by music since very young age, he studied piano, although, from the beginning, his aim was to study violin.

Being around his father’s workshop since his childhood, he started to make miniature instruments and aeromodeling.

He started to study Arts and later at university, enrolled in a Design degree. He had consolidated his knowledge and love for woodwork when he moved to Amsterdam and joined an arts foundation.

In 2013, he moved to Galicia, Spain. Spending time across the board, he joined his father’s workshop in Portugal to learn the craft. At the same time, enrolled in the Lutherie school and different workshops.

The main focus of his work is the making of new violins, violas, violoncellos, and restorations.